Lacey Leavitt and Ron Leamon speak on behalf of the WA Film PAC at the Seattle Film Summit.

Washington Filmworks has had a busy week with the Seattle film community. The Northwest Film Forum set the stage for two great events that explored the business of film and the changes occurring within the industry.

The Seattle Film Summit launched the first of the two events. The Seattle Film Summit’s mission is to empower and inspire Washington state media producers, especially filmmakers, to discover and develop innovative methods of storytelling, funding, and distribution.  In its third year the Summit partnered with the Local Sightings Film Festival to bring the community a series of non-nonsense panels about the business of film.

Washington Filmworks Executive Director Amy Lillard participated in a panel on Saturday focusing on film and television production on the west coast, “From LA To Vancouver: Competition or Collaboration.” Joining Aaron Wolf (Filmmaker and CEO Howling Wolf Productions), Daniel Sol (Co-Founder and Co-Director of HollyShorts Film Festival), Rosalie Miller (Filmmaker), and moderator Stefan Hajek (Filmmaker, Wanderhouse Productions), Lillard was able to briefly discuss the production incentive program. She also detailed the Innovation Lab, a program designed to support Washington based filmmakers. Also interesting was the perspective LA filmmaker Wolf had on Washington’s filmmaking community, noticing that it promotes collaboration and positive experiences rather than fierce competition. Wolf effused how exciting and refreshing the filmmaking community is here, and how it espouses support over betrayal. Finally, the panel wrapped discussing whether Washington should promote their filmmakers across the country, or bring new talents into the state.

Following “From LA To Vancouver: Competition or Collaboration,” was a panel dedicated to the efforts of the Washington Film Political Action Committee (PAC). The group advocates for the growing film, television, and commercial industry in Washington and strives to educate the community and legislatures about the industry’s state and needs. WA Film PAC leaders Ron Leamon and Lacey Leavitt, and longtime film advocate James Keblas, were on hand to explain how the group promotes Washington State as a diverse and ideal environment for production and how important it is to have the industry advocated on its own behalf. Senator Jeanne-Kohl-Welles also participated in the conversation to give some Olympia insight and important information on how to approach elected officials about the film industry. WA Film PAC is doing very important work on behalf of the statewide film industry. Check out their website for more information. 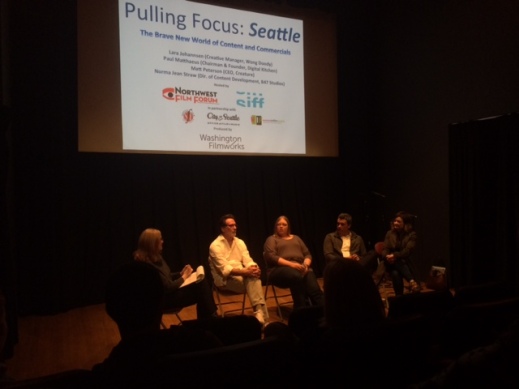 Last night, Washington Filmworks re-launced “Pulling Focus” in Seattle, a series about the business of film with a discussion entitled “The Brave New World of Content and Commercials.” Lillard moderated a panel of advertising personalities – Paul Mattheaus (Chairman and Founder of Digital Kitchen), Lara Johannsen (Creative Manager at Wong Doody), Matt Peterson (CEO of Creature), and Norma Jean Straw (Director of Content Development, B47 Studios). The discussion explored the shifts caused by digital pipelines in the marketing world, and how the traditional model of 15 and 30-second commercials is now deemed antiquated in favor of bold and boundary-breaking content-marketing. Mattheaus noted the challenge today is how to engage audiences with a brand by not interrupting them, as commercials often do. He explains that artists (filmmakers, designers, etc.) are now at work with agencies, trying to create content with relevant meaning to not hook or catch consumers, but create genuine interest. Johannsen agreed, saying that companies hire highly creative individuals to think flexibly for each client and brand, and highlighted the interactivity at play in content-marketing. Citing Starbucks™’s YouTube channel in which several stories were told in several countries, Johannsen argued that branded entertainment models often change based on consumer habits – the more involved and active watchers get, the more interactive and dynamic the content becomes. Straw added to Johannsen’s perspective, saying that a prominent goal that pops up in this new environment is to balance the paying brand’s values with a key, original, and striking ways to reach audiences. Peterson thinks this new system comes down to one word: content. Agreeing with his peers, he sees branded entertainment as an opportunity to move out of the old format and tell deeper and fuller stories, assuring his client and consumers that it’s quality rather than interrupting noise. Altogether, the panelists concluded this new world of content and commercials is full of mutual opportunity – brands learn how to publicize and promote their products in a bold new way, while agencies employ gifted artists to make it happen.

The next of the Pulling Focus series will be in Spokane on Thursday, November 6th, with independent film producer Lacey Leavitt (Laggies, Lucky Them) on how to get your story from page to screen. Preceding the event will be a Town Hall meeting focused on lobbying and supporting elected officials.